With the temperatures starting to drop is time to the return of these small yellow ones always in the species of tree of the last year. 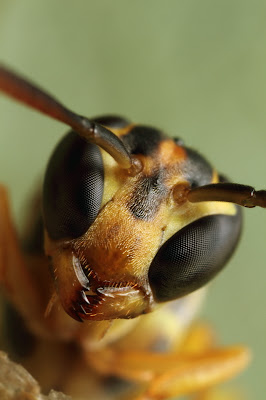 This green background is the leaf were the nest is suspended, is possible to see it in the second photo. The wasp not always was positioned with the leaf behind the face, get the right moment of it demanded patience and was harder than the wasp portrait by itself. I strongly rejected a black background for this photo.

The use of f/9 and with the lens fully extended resulted in a effective aperture of f/54 and a calculated depth of field of about 0.15mm (canon booklet info) the DOF start to transition to out of focus between the antenna, I believe the part behind this could remain out of focus in this particular position.

The use of sharpening in post processing ruined middle of face, became really cartoon like, so used very mild sharpening

The eyes were an obsession, some frames took the one at right focused and some others the left one, this frame have the best equilibrium of focus of the two sides of compound eyes a very important thing when shooting a single frame image.

Feedback is important, and previous feedback demonstrate the jaws (mouth) is considered interesting, is better to place it at least in focus there's not detail that demands high resolution to be acceptable, as the eyes so the aim of the focus is a little in front of the eyes to give eyes first priority and the jaws the second, but still readable.

These are very small above their nests comparatively. 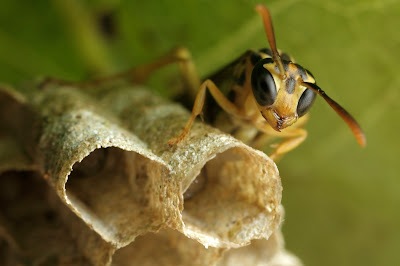