This happened yesterday, very hot summer and most of the insects were too active for photos. In situations like this the few steadier ones are in the moment of mating or feeding, just what happened to these nice couple of flies. 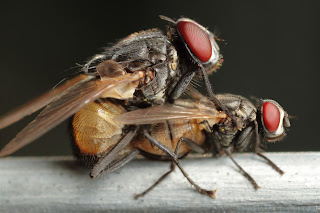 They were mating in the fence of my home, later afternoon and the sun was opposite to their bodies in the photo, this explain the relative background light and some light in the amber parts of their bodies. This is a combination of two photos, with Canon 7D and Canon MP-E 65mm @ about 2 x magnification, one photo had the body of male in focus and other the body of female, joined the two by working with layers in GIMP software, a process called focus stack. The photo used Canon 580 EX II flash diffused and about 1/4 or less manual power to illuminate the flies, that could appear shadowed is the photos were taken at natural light. For a scene like this the manual setting of the flash is my personal preference, the light rays from the sun hit the lens and could make things difficult for ETTL to correct measure the scene, so you would need to dial the ETTL compensation up in a guessing game, I prefer the simplicity of the manual control.

There was enough time to make two videos, one against the sun of very bad quality but the with some transparencies in the abdomen were is possible to see the movement of internal organs, and the second with the sun with incidence into the flies that document the external activity of them.

These videos were with Canon MP-E 65mm and Canon 7D 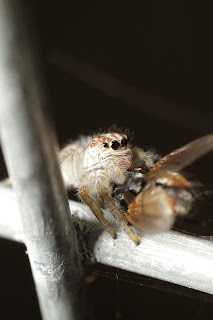 The unfortunate part for the flies was the approximation of this jumper spider (salticidae), she approached the couple and with a nice, well calculated jump assaulted the couple and killed one of them. (not sure which one as the spider escaped fast with the meal)

By the level of activity of the flies at the time of the photos would be impossible for me or for the spider to capture them, but unfortunately for the flies the fence is a not so secure place and it could first appear :(
Posted by gmazza at 3:28 PM No comments:

These friendly beetles live in a passiflora plant very near my home, yesterday didn't have much time to a large scan of area looking for insects so taking the most of the opportunities near home is a viable alternative. 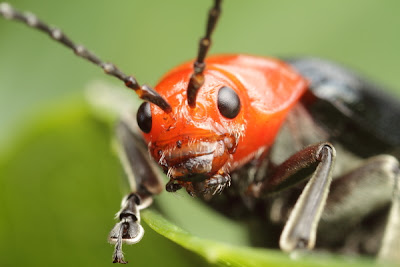 These girls have very interesting feet physiology, serving for defence and adherence, by the means of patience for a good moment the photo registered the face and a good deal of detail of the feet. There is a crop from the feet detail: 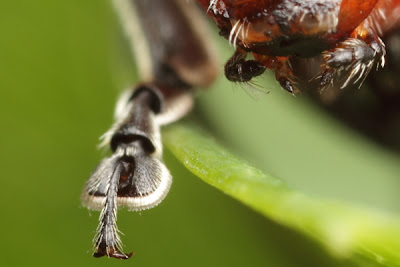 The brush pattern in the feet adhere by a means of a "oil" in the brushes, with function as a glue, is possible to note different brushes densities (less dense in the area of contact), as they alternate the brushes used to economize oil. In the event of an attack they are able to mobilize all the brushes for a strong adherence which could avoid even a ant attack.

By the photography side the photo is with Canon 7D with Canon MP-E 65mm macro photo lens @ 3x magnification, 580 EX II flash bracket mounted, handheld. Secured the leaf with finger and folded a little to fill the background with green avoiding the black background
Posted by gmazza at 5:19 PM No comments: